Museums, churches and places to visit in Kimolos

The Archaeological Museum of Kimolos

The Archaeological Museum of Kimolos is housed in a two-storey traditional residence opposite the Castle and the Metropolitan Church of Panagia Odigitria. It is a donation from the Vafeia family, which was accepted by the Ministry of Culture. The exhibition includes relics from the excavations in the Ellinika area, and findings from various locations of the island, as well as copies of two important discoveries on the island's history.
Tel: 2287051719, Ticket 2 €, Reduced 1 €, Open: Tues-Sun 09: 00-16: 00

The Folklore and Maritime Museum was founded by physician Manolis A. Christoulakis and is housed in his father's house within the traditional settlement of Kastro next to the upper door (eastern). His collection of authentic objects used by the Kimolians in their everyday life is very valuable. It consists of agricultural, dairy, woodworking apparatuses, fishermen and doctor’s tools as well as furnishings from old houses, including their household utensils, clothing and traditional costumes. The naval section is also interesting to visit.

Due to its magnificence and its imposing position in the village, it is one of the first buildings that you’ll see while arriving at the port of Psathi. Its construction was completed in 1874 with the help of all the inhabitants of the island. You should visit it to admire its rare icons and its interior Cycladic design.

Note: there are more than 100 churches on the island, many of which have been characterized as Byzantine monuments. It is worth noting that almost all churches in Kimolos belong to families that are responsible for their preservation and celebration of feasts. If during your stay on the island you hear bells ringing, ask the locals which church is celebrating and visit it. You will surely not be disappointed by the view and the engagement with the Kimolians.

Do not expect to see great walls and towers. The castle is the fortification settlement of the old village. Most of the houses of the outer castle have been saved, because after the foundation of the Greek State that marked the end of piracy, the residents managed to make them bigger. They opened doors and enlarged them so the walls of the castle became the inner wall of the houses. The change is evident inside the "Brachera", a coffee shop that forms part of the castle's outer wall. In addition to the outdoor tour of the narrow streets with two-storey houses, you can also walk around the inside castle. Now that the pirates are gone the doors stay open. The houses, inside the castle, were abandoned by the villagers because they were too small. While crossing the West Gate through into the castle, you will find yourself in the oldest and most beautiful church of the island, the Genesis of Christ, built in 1592 and designated as a Byzantine monument, just like the entire settlement of the castle.

It's worth visiting the oldest Kimolos business. Bohori's cafe opened in 1922 and its still housed in the same property, with the supervision of the same family and a continued daily operation for a century now. The only thing that has changed over the years is its provisions. It used to be a drug delivery centre (during periods when the island did not have a pharmacy), a telephone centre, a political event room (from local assemblies and briefings to the reception of political figures), and barber shop, café, tavern, and hotel, entertainment centre with a DJ or traditional music depending on the mood. Like any self-respecting business, it has not rejected its past and continues to offer its services from early in the morning until late at night.

Polyegos or Ypolivos or Polyvo, is the largest uninhabited island in the Mediterranean, on which the monk seals and sea turtles have found peace, along the pristine beaches of Kimolos. Don’t lose the opportunity to discover them too. It is a beautiful landscape with lacy beaches on the west side. A true "frame" as the Kimolians usually say about the view they come across every day. While making the round of the island, surprises are waiting for you: beautiful rocky cliffs that hide incredible caves and reveal the “lightest blue water” you have ever swum in.

“Skiadi” in the local dialect means a hat. It is a mushroom-like stone created by volcanic rocks. It has taken its form because of the different resistances to the erosion of its rocks. It is located northwest of the island with a wonderful view of the west coast of Kimolos and the neighbouring Milos. The best time to go to Skiadi is in the afternoon to enjoy the sunset and walk on the trail. Ask about the planned walks in Skiadi organized by the volunteer group KIMOLISTES.

Explore the submerged ancient city of Kimolos while viewing the most impressive sunset in Mavrospilia.

They can be seen from almost any point in the village but if you want to see them closely, the view of the Aegean Sea will reward you. You can go to Xaplovouni from four different neighbourhoods of the Village. Choose the path from Myzithrou so that you can also visit the chapel of Pantokratoras (Byzantine monument) with the panoramic view.

In Kimolos “magazia” are caves in white volcanic rocks that are used for the preservation of boats during the winter months. In any seaside area you see these caves, you will also see “magazia”. The most distinctive and picturesque areas are Rema, Goupa and Karras. Rema and Karras are also suitable for diving.

Geological treasures of the volcanic soil of Kimolos that are located on the northwest side of the island and are only accessible by boat. Looking at them, that which impresses you the most is the power and beauty of nature.

2 beautifull vacation rentals in Kimolos, each can accommodate 4 Guests in two separate bedrooms and an extra child at a sofa bed in the living area. A splendit accommodation choice for an unforgettable holiday in the unique island of Kimolos. Please send us an inquiry and book your accommodation at the best available rates. 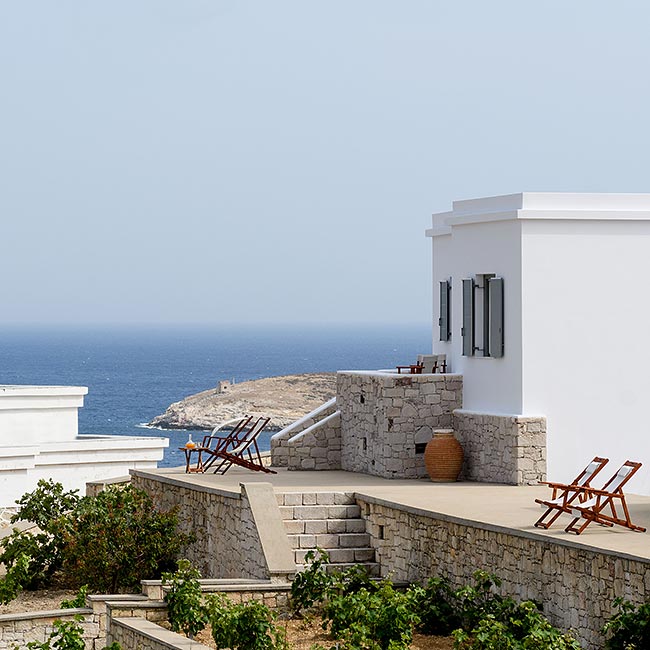 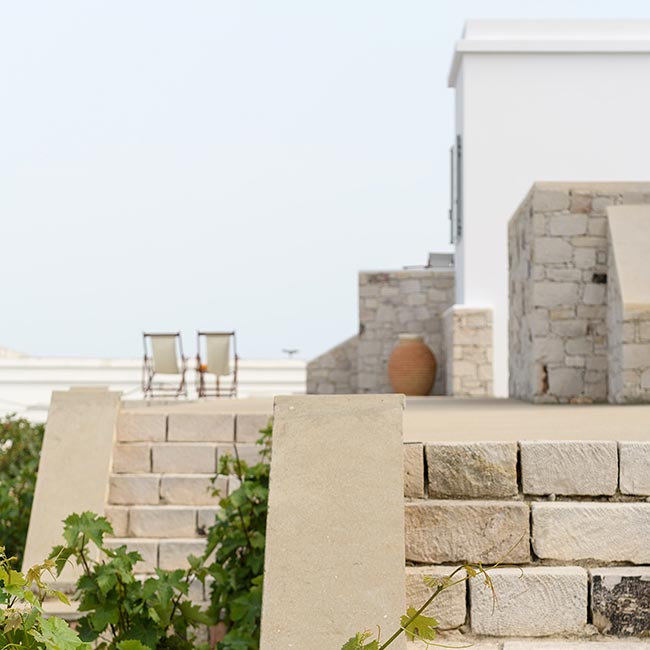